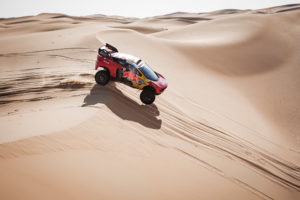 On the BRX side:

Our Loeb & Lurquin duo won 6 stages in a row and 7 podiums in total! An absolute record that was held by Ari Vatanen since the 1989 Dakar with his Peugeot 405 T16!

For their last stage, our champions preferred to play it safe in order to keep their 2nd position in the general ranking! 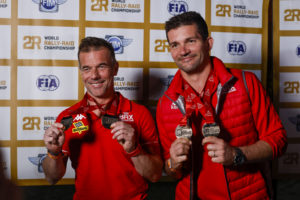 We must remember that after the 2nd stage with a 2-hour delay and a 31st place in the overall ranking, the BRX duo no longer believed in the podium. However, they made it ! Our brand baseline takes on its full meaning here… Nothing will stop you!

We can congratulate Sébastien Loeb on his competitive spirit and achievement !

On the Sébastien Loeb racing Bardahl Team side:

For a first Dakar, the results are more than deserved! It is the achievement of enormous work and perseverance by our 2 crews and the entire Sébastien Loeb Racing technical team!

This is the first stone laid since the SLR team plans to keep the adventure going!

• For Florent Vayssade & Nicolas Rey, the duo enters the TOP 10 of the SSV category!

Remember that Xavier de Soultrait discovered this SSV for the first time only a few months before the start of the Dakar! 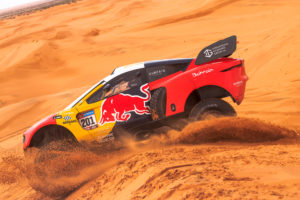 With this ninth stage of Dakar, we fully understand that the game (or race in this case) is not over yet!

The news is excellent for our champion Sébastien Loeb and his Belgian teammate Fabian Lurquin!

After several incidents in the dunes, they manage to sweep the board by reaching the first place for the third time in this Dakar 2023! 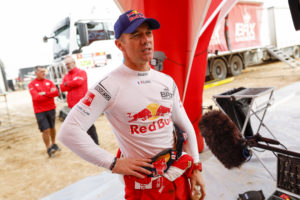 For this 45th edition, Prodrive, who designed the BRX Hunter T1 vehicle, manages to get its three vehicles on the podium!

The BRX vehicle, with its exceptional qualities and parameters, proves it can tackle numerous terrains, even the most inhospitable ones!

The BRX Team is placed 20 minutes away from the second and 1h40 away from the first place at the general ranking. Everything is possible for The Boss! 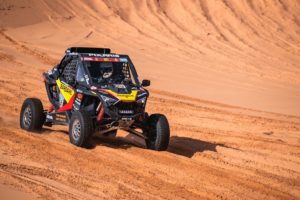 The two teams make great progress and learn a lot! Needless to say, they had very limited time to tame the Polaris vehicle. However, they are both present in the top 20 as Xavier de Soultrait reaches the 7th place at the stage ranking! At the general ranking Florent Vayssade and Xavier de Soultrait respectively reach the 13th and 14th, with only 6 minutes of difference.

The Sébastien Loeb Racing Bardahl Team is at the top of this first Dakar!

It is the rest day today. Tomorrow’s stage is a 686km route that will stretch from Riyadh to Haradh. 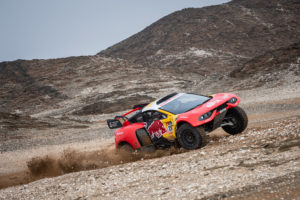 A second place on Friday, Sébastien Loeb managed to move up in the rankings!

It is without counting on the performance of this weekend, where the BRX pair managed to go along a scratch time!

Our favorite team (201) wins the first place after 476km of liaison and 346km of special! It is their second stage win on this Dakar 2023,  enabling them to reach the 4th place in the overall.

A great success for the BRX Team, for more trust in their vehicle! Weaknesses are now known and pilots have experience. A final podium does not seem so far!

Xavier de Soultrait is in a great mood as he jumps from 20th to 13th place in general ranking!

Less luck for Vayssade, as he loses several places in the general ranking and ends at the 18th place!

After a first victory on stage 4, Sébastien Loeb & Fabian Lurquin were on track for a second podium.

Although they multiplied the strong attacks throughout the special, it only took a small mistake on a dune to lose almost 20 minutes.

The watchword of the duo: go back and attack even more.

Fun and more fun! Our 2 crews are hanging on and still remain in the top 20 of this Dakar!

Xavier de Soultrait finished 17th in the stage and is now 18th in overall ranking.

STAGE 3 STRECTHING FROM AlUla to Ha’il, WITH 447KM SPECIAL AND 222KM OF LIASION.

Another day in the Saudi desert, except that the temperatures did not exceed  15°C and that our teams had to face

capricious weather and cross a torrent in the middle of the desert! For our competitors, the day has not really been successful, but full of problems.

Some of Sébastien Loeb’s and Fabian Lurquin’s fears came true with a lot of mechanical problems right from the start! Our duo still keeps their spirit high but knows that they will not reach the top of the general ranking. 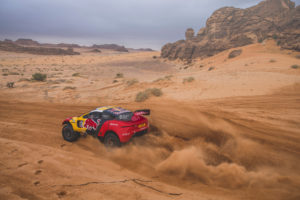 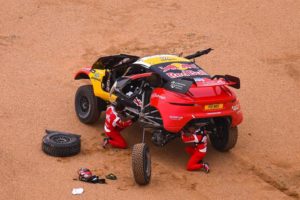 At the end, they arrived at the 32nd place, but they still climbed the general ranking from position 31 to 26, with 1h36 behind NASSER AL-ATTIYAH.

The two other BRX vehicles finished in the Top3 with a win from Guerlain Chicherit and a third position for Orlando Terranova. 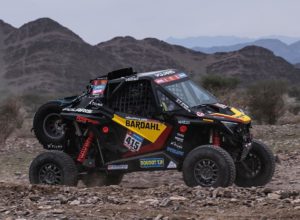 The 2 Polaris RZR’s were not spared either during the day, between problems on the road and with the navigation.