This classic car consumed too much oil. Oil consumption in classic cars is common because the material used wears as a result of time and allows for looseness to develop between the cylinder and piston. 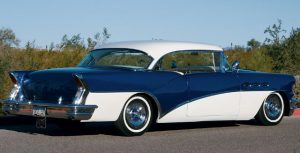 In this particular car, the oil consumption was approximately 1 liter at every 4000 km. Bardahl B2 Oil Treatment from the program was used which provides a thick film layer. The sealing is thereby improved and the oil cannot slip along the cylinder wall. Furthermore; as a result of special extreme pressure additives in the formula, friction and wear substantially reduced.
At the oil change Bardahl Classic Motor Oil 20W50 is added, along with a can of B2 Oil Treatment. The result is that high oil consumption was reduced by more than half.

This is an example of a Buick from 1956. However; every classic car, with an original engine which has not been overhauled, you can easily add B2 Oil Treatment to the oil (make sure you do not overfill).