Moisture and bacteria in diesel. 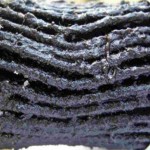 much moisture in diesel, grow and cause major problems in fuel tanks and fuel filters. The photo shows a diesel filter with a bottom layer of bacteria.

• Bardahl BDC prevents moisture in diesel (and so bacteria is kept away), increases the cetane rate, improves the lubricity. When you use Bardahl BDC, your engine runs better, more economically and fuel saving up to 3% is possible.

• When you have a lot of moisture and bacteria in the diesel you can remove this with Diesel Anti Bacteria. A high quality biocide that operates directly when added to the contaminated diesel.

More and more biodiesel is added to diesel fuel. Also there is much less sulfur in fuel than before. This makes the fuel leaner and reduces lubrication. From the environmental point of view, the addition of biodiesel and the reduction of sulfur in fuel are nice developments. However, in practice, supplying biodiesel and reduction of sulfur cause major problems, which eventually can lead to bacterial growth in the fuel tanks.

How can the above occur?

Biodiesel attracts up to 8x more moisture than regular diesel. Moisture is a first source of potential problems. How rises moisture (water eventually) in the fuel tank? Temperature fluctuations, dark rooms, long storage (for example after winterperiod) and poor sealing of the fuel filler neck gives moisture/ condensation enhance a chance. There is always a percentage moisture in fuel. Diesel can include up to 0.02% of water, without loss of quality. If there is more than 0.02% moisture in the diesel, this will slowly sag to the lowest point of your fuel tank.

Too much moisture / water reduces the lubricity of the diesel fuel, and will ultimately lead to bacterial growth. These bacteria must be removed before they can clogg the fuel filter. If fuel filters are clogged completely this means that your engine is no longer running, with all its consequences. To minimize the percentage of moisture in the fuel there Bardahl BDC. However, use of BDC gives more benefits as you can read below.

Do you have bacteria in diesel and do you want to remove it? Use first Bardahl Diesel Ani Bacteria. Is the fuel clean and free of bacteria, than you can switch to Bardahl BDC.

Use of Bardahl BDC provides:

Read the official ASTM * Test report and view the points on which Bardahl BDC has been tested.

Important: You must add it above the freezing point (min + 5°C)

For who is Bardahl BDC?

Bardahl BDC is suitable for all ‘bulk diesel consumers’. When large amounts of diesel have to be storaged for a longer period of time there is a possible risk of moisture and in the end of bacteria. The damages can be significant. In addition to the above advantages, there is also a financial advantage when using Bardahl BDC.

* ASTM International (originally American Society for Testing and Materials) is an American standardization organization. ASTM publishes technical standards in the field of materials and services.

Diesel Anti Bacteria is an effective biocide specifically developed to remove bacteria from diesel. Bacteria can clog the diesel filters. In the best case, the fuel filter is only partially blocked, but often bacteria will block the filter fully which means that the engine is not running anymore. The risk of engine damage and damage to the high pressure pump is hugh.

Half a cup of water in 1000 liters of diesel is enough to start the microbiological growth process. Water is insoluble in diesel, especially in a hot and humid environment. It condenses out of the diesel and air in the tank when it is cooling off. Droplets are formed on the bottom of the tank and on walls in the fuel pipes.

The biosludge can cause engine failure or damage due to clogged filters and injectors. Microbes can cause rapid and severe corrosion of tanks and components of the fuel system.

Bardahl Diesel Anti Bacteria has been tested by leading manufacturers such as MAN, Daimler and MTU and is suitable for all diesel engines and pumps.

Is the diesel completely contaminated with visible sediment, or is there a technical failure such as a filter blocking? Use a SHOCK DOSAGE.

More information?
If you cannot find what you are looking for or want more information, please fill out the contact form. We will handle your request promptly and professionally. You may also directly contact us by phone at 0031 78-651 23 22.